When Two Chicks Get Married…

Posted on October 6, 2014 by The BLS Program at UNCG | Comments Off on When Two Chicks Get Married… 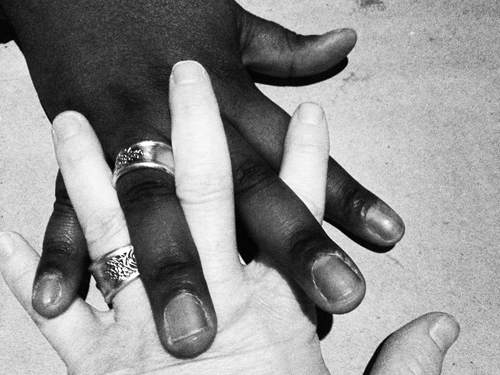 This Saturday it’s October 11 again, so it’s National Coming Out Day again.
Last year I rhapsodized about how much I love working for UNCG. And I still do. However, this year my brain isn’t as much on sexuality as it is on gender, gender roles, and being gender non-conforming.

Currently, I’m teaching a face-to-face course on race, gender, and social class inequalities. These last couple of weeks in particular, we’ve been talking a lot about gender roles and sexuality, and how these two separate concepts are so intertwined in society. We live in a heteronormative society that takes its cues on how you’re supposed to act in relationships from our gender roles. When you don’t fit into either the gender or sexuality mold that society expects, you’re left without a cultural scaffolding to guide your interactions with other people and in relationships. Additionally, sometimes other folks don’t quite know what to say to you.

This past December, I had the great pleasure of asking my now wife to marry me. She knew I was going to ask—in my world, you don’t ask questions like that if you don’t know the answer—but nonetheless, the evening of the proposal came and we were both incredibly nervous. I was proposing on campus (after all, it’s gorgeous, my work at UNCG is a huge part of my life, and it seemed way nicer than in my living room with the dog and the roommate trying not to pay attention to what we were doing). Originally, I’d intended to ask her in front of Minerva, but my wife guessed that, so I fell back on my second favorite spot on campus: the round pavilion on the side of the School of Music Building.

She’s currently living several states away while finishing her degree, so I’d promised her a bit of a campus tour. However, every time I stopped to tell her about something, she started getting more nervous (thinking that it was time), so we finally just wandered back to the School of Music. I’d had this great speech planned that zoomed out of my head as soon as it was time, and instead I just said “Lee, will you marry me?”

She said yes. We both sniffled. And then I asked her to ask me, and she did. And yes, I said yes.

(We both wore engagement rings. There was never any question.)

“I know, I know I shouldn’t ask this… but when two women are out on a date, who pays?”
“Did you really just ask me that?”

So, after the proposal and traipsing around campus in the dark, we took our dressed-up selves out to an amazing seafood dinner (I paid, her being the “broke college kid” that she is), and all was right with the world. Which brings me to this: When you’re out to eat, pay attention to the dynamics of the check drop. The check usually gets dropped in front of my (male) roommate; my card with my picture on it has gotten dropped in front of him, as well (and he has several inches more hair than I do). On the other hand, when my wife and I are out together, waitstaff approach the table, and then pause for a moment before carefully placing the check in the middle of the table.

“So, who cooks?”
“I do. I have a gluten intolerance and she’s worried about poisoning me. And I like to cook. She does the dishes though.”

This is not news to anyone who’s in a same-sex relationship, but since folks don’t know what to say sometimes, you get a lot of questions. Sometimes you get a lot of nosy questions. Sometimes folks are just curious. But all of the questions get back to gender roles; often folks have real trouble considering how you might structure a relationship with two women, two men, or two genderqueer folks. The woman cooks and the man sits in the living room with a beer, right? Feedback that I get from students in class lets me know that many students are being raised in homes with non-traditional gender roles; however, I’ve also heard really heartbreaking stories from female students about being expected to do all the heavy lifting in households where fathers and brothers were not doing their share. We may try to assert that we live in a post-racial society these days, but no one even tries to make that assertion about gender. We know better.

I’m gonna let Mae Martin take this one for me…

See, there is no “guy” in the relationship; we’re both just us. I cook. She does the dishes. Unless she needs to study, and then I do them. She mostly takes out the trash and recycling. Neither of us works on cars; we both have a little knowledge (her more so than me), but we don’t like to do it and we’re happy to pay other folks to do it.

She wears men’s clothes all the time but is way more particular about her looks and painting her toenails than I am. I keep my hair short most of the time (I grew it out for the wedding, but right now it’s high and tight), and wildly vary shaving my legs and painting my nails. There are mornings when my room resembles the clothing scene from The Great Gatsby, because nothing feels right—not men’s clothes and not women’s clothes, and while UNCG may be pretty laid back, I still can’t go teach class in my pajamas.

She can drive anything on wheels (having driven trucks through Iraq during Operation Iraqi Freedom), but she prefers automatics because of a bum shoulder. I prefer to drive a stick. I kill the spiders (she’s terrified of them), and she reaches the stuff on high shelves (being nearly a foot taller than I am). We’re still working out a lot of this (see also: long distance marriage), but whenever we do work out something, it’s because it’s the solution that makes sense, not because society tells us that one of us is supposed to take out the trash or fold the clothes (answer: she’s a lot better at that than I). Opposite sex couples have this process of negotiation to go through as well and often go for the “makes sense” solution, but they also have a lifetime of socialization and culture behind them as well (for better or worse).

Gender is in everything we do; our society eats and breaths gender in a way that we don’t notice when we’re in the middle of it. We still have terrible levels of inequality in our society (we’re still discussing women’s earnings as a percentage of men’s, for example). And when we get down to people’s lived experiences, the differences can become even more stark: ask Ben Barres, who was infamously told that his “sister’s” work wasn’t as good as his. (And we’re not even getting into issues of violence or job discrimination against trans* people, or that some days, there just isn’t a box for you on forms, because I don’t have those emotional cycles today.)

“What did y’all do about last names?”
“Well, we had the same options any couple has, right? One person takes the other name, you hyphenate, you both keep your name…”
“Yea, I guess so. Huh.”

The takeaway is that living sexuality and gender is sometimes super messy, but a lot of times it just is what it is; mostly we’re just a normal old couple doing boring old couple things like work and walking the dog. As I’m fond of telling my students, no matter who is in the relationship, someone has to buy milk and someone has to walk the dog and someone has to grade papers. I’m just glad that I found my person that I want to buy milk with for the rest of my life. 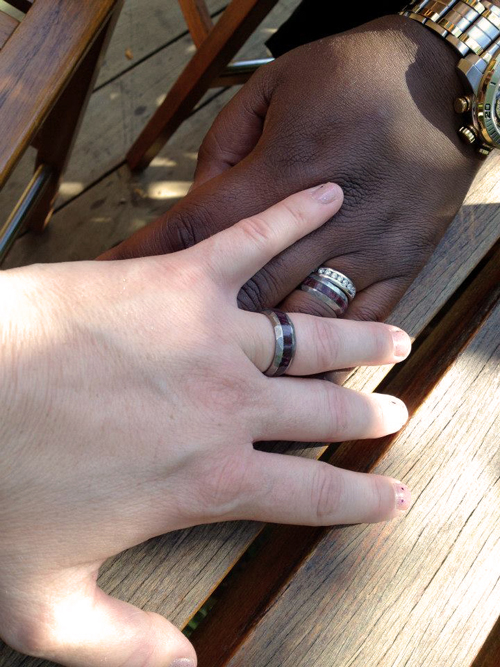