Posted on August 4, 2014 by The BLS Program at UNCG | Comments Off on Tim’s Vermeer: The Science of Dutch Art 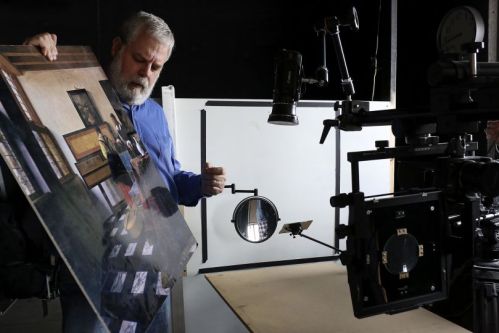 Tim Jenison with his “Vermeer” and the equipment used to make it.

I love a good documentary film, especially one about art, so I was happy to receive Bob Hansen’s recommendation of Tim’s Vermeer. It is an eighty-minute film about one man’s quest for art featuring Tim Jenison, an inventor, video equipment specialist, and entrepreneur who is fascinated with the paintings of Johannes Vermeer. Known as “the painter of light,” Vermeer was a Dutch painter of the seventeenth century, best known for his portraits, interior genre scenes, and inclusion of detail. For more information on the life and work of Vermeer, see the website Essential Vermeer.

The film is narrated by Penn Jillette and directed by Teller, of the famous team of magicians Penn and Teller. Penn and Teller were also a part of the team that produced the film, and themes of documentation and magic pervade it. Other major themes include the nexus of art and technology, photography and illusion in art history, digital technology and technological imaging in art, and seeing through photographic reproduction versus human seeing. These themes relate to two of my BLS courses, BLS 345, Photography: Contexts and Illusions and BLS 346, The Art of Life. Discussions of art history and the media and techniques of artmaking in the film are also relevant to my Art 100 course. Tim’s exposé of Vermeer may be interpreted as challenging the notions of artistic talent and exposing the myth of so-called “genius” painting. Yet, in the process, Tim discovers a newfound awe of Vermeer’s resources and artistic focus.

Tim is most interested in Vermeer’s possible use of early camera technology and reflective devices. Inspired by Vermeer’s Camera (2001), a book by Philip Stedman, professor at University College of London, Jenison crosses continents and narratives of art history in pursuit of the truth behind Vermeer’s oil painting The Music Lesson (1662-1664), and eventually attempts to recreate it. Tim says in the film that he feels a kinship with Vermeer as an inventor and musician. He also explains why he decided to focus on The Music Lesson, stating that it is “so complete and self-contained,” compared with all other Vermeer paintings, and he declares it “a scientific experiment waiting to happen.” Through his research and art project, Tim aims to offer an “alternative narrative of Vermeer.” 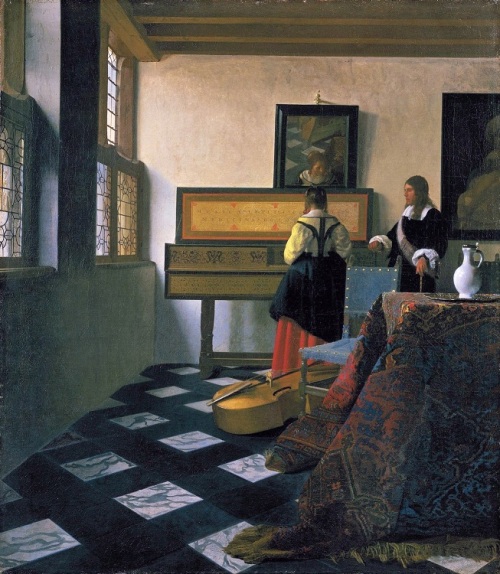 While experimenting with various reflective devices, Tim paints his first portrait from the reflection of a photograph of his father in law. He is modest about his painted product and says emphatically that painting it was a decidedly object experience, rather than a subjective, or personal one. Tim then zooms in on studying image-making and methods of illusion specific to the seventeenth century, which includes optical machines and—most prominently—the camera obscura, an ancestor of early 19th-century photography.

Tim then compares the painted details of The Music Lesson to optical effects of photography, concluding that Vermeer depicted photographic seeing, rather than human sight. He states that the appearance of “absolute brightness” in the painting is proof that Vermeer painted from photograph, because such light is not visible to the naked eye.

To prove his hypothesis, Tim first visits Delft, Holland, where he learns to speak Dutch, to grind pigments, and to mix oil paint. He also studies the light, furniture, and interior architecture. Finally, he hires artists to make exact replicas of the pottery found in the composition of The Music Lesson. Tim discusses a list of craftsmen and engineers he would need to serve as “experts” in building a life-size model of the scene, saying that he can attempt to complete all the work with a computer.

Tim proves that he is a quintessential “Renaissance Man” (although Vermeer was post-Renaissance historically); to be photographed by a self-built camera, Tim constructs a replica of the scene of The Music Lesson in a San Antonio warehouse from wood, concrete, metal, and glass. Tim’s set is complete with furniture, woodwork, stained-glass windows, and musical instruments. Experimentation leads Tim to discover a system of lenses and mirrors (including a shaving mirror) which, joined with visual color-matching tricks, allow him to build a surprisingly accurate, three-dimensional reproduction of The Music Lesson. Tim also shows his musical skills as he plays on the violin that will serve as his model in the composition.

Earlier in the film, as Tim and Philip Stedman each tried their hands at copying portraits, the music and tempo of the shots slowed down, but they build up again as Tim builds the room and begins to paint the image from it. More dynamic camera work and background music set the stage for many scenes of Tim painting, in which he used his daughter and her friends as live models. This pace is held up for 8 minutes. Time is marked by images of the calendar dates in the lower corner of the screen, as if torn from a desktop calendar. Everything slows down significantly after forty days. At about fifty days, Tim makes a discovery; he finds curves in the painting where there should be straight lines. He explains that Vermeer’s so-called mistake in angles of perspective was a result of viewing and painting a photographic image. 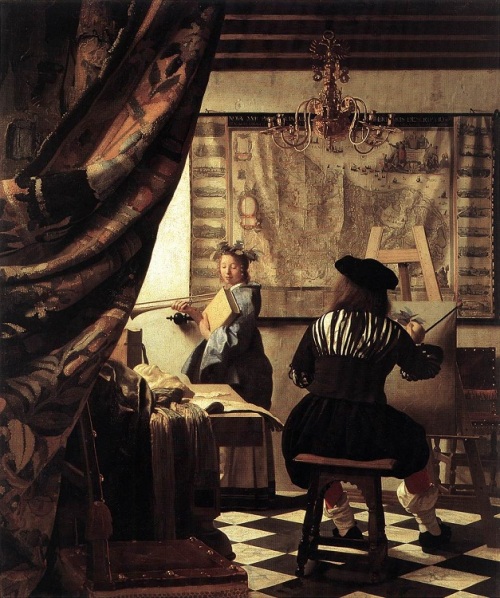 Following this discovery, time further drags as Tim experiences the physical pain of his actions and seated position, while the viewer watches him paint details such as violin strings, minute decorations on the piano, and the individual threads on a draping, patterned tablecloth. Somewhere in this period, a threat of carbon monoxide poisoning arises in the studio. I must admit, I do not remember why. I may have zoned out. After eighty to ninety days, Tim becomes “repulsed” while painting a royal blue chair with bronze lion heads on the back and correcting his mistakes with a cotton swab. All in all in the film, there are approximately thirteen minutes of footage of Tim painstakingly painting. It feels longer.

In the final scenes, Tim shows Stedman and David Hockney his painting. Hockney, with whom Tim has met previously in the film, is another artist interested in these reflected forms and technologies (see David Hockney’s website here).

Stedman and Hockney discuss Tim’s painting and determine that it is better than Vermeer’s. In the last shot, the humble Tim claims Vermeer was an inspiring inventor and artist. 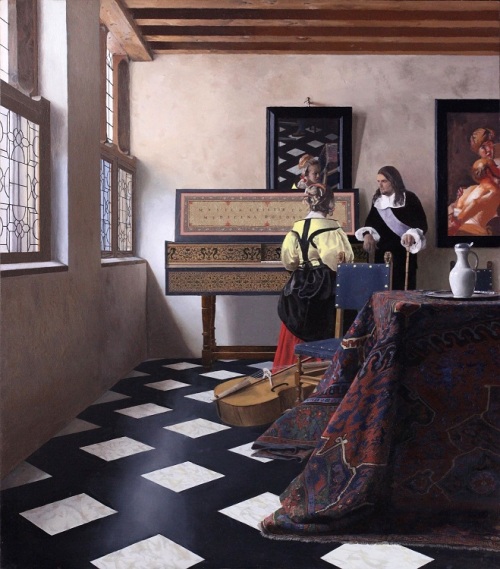 The film chronicles important discoveries and historical revisions, but I wasn’t sure if the information alone carried the film. I was just so fascinated by Tim Jenison. He stole the show. He was obviously very smart and skillful, yet also witty, eccentric, and obsessive. It takes one hundred and twenty days for him to paint a replica of a famous Vermeer painting, and the whole project, captured on film, took over five years (2008-2013). For this entire time, Tim’s life seems utterly driven by art and photography.

This entry was posted in Visual and Performing Arts and tagged Ann Millett-Gallant, art, film, science, technology. Bookmark the permalink.