I have a secret:

I love the accordion.

I play the accordion.

Years ago, this would not have been an issue.  There would have been no need for secrecy.  The accordion was one of the most popular instruments for kids all over the country to learn.  From the end of World War Two until the late fifties and early sixties, the accordion was king.

And then came Elvis Presley, Rock and Roll, and the electric guitar, which moved from being a percussion instrument playing rhythm accompaniment to the lead guitar of contemporary pop music.  (And the reason that “Guitar Hero” is a billion-dollar franchise and “Accordion Hero” a practical joke gone viral.) 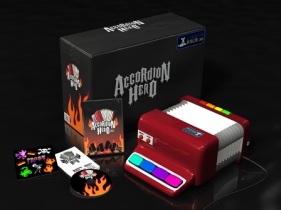 It turns out, once your typical American kid got one look at the now iconic Elvis with his guitar, accordion sales plummeted, as did the instrument’s standing in popular music culture.

But the accordion didn’t just lose its popularity.  That would have been fine.  I rather enjoy having interests and hobbies that are not popular.  But the accordion is not just “not popular,” or even unpopular: it has taken on the persona of nerdiness, the epitome of square and boring, old fashioned, and lame.
It has spawned a minor industry of jokes:

What’s a gentleman?  Somebody who knows how to play the accordion, but doesn’t.

What’s the range of an accordion?  Twenty yards if you’ve got a good arm!

What’s the difference between an accordion player and a terrorist?  Terrorists have sympathizers.

What’s the difference between an onion and an accordion?   No one cries when you chop up an accordion.

What’s the difference between an accordion and a concertina?  The accordion takes longer to burn.

What do you call ten accordions at the bottom of the ocean?  A good start.

What’s the difference between a chainsaw and an accordion?  A chainsaw can be tuned.

What’s the difference between a dead skunk in the road and a dead accordion player in the road?  There are skid marks in front of the skunk.

You get the picture.

Or maybe you don’t.  So here’s a couple of pictures of “famous” accordion players from popular culture to help.

Not exactly an instrument that exudes “cool.”  Or anything other than disdain.

It turns out, the accordion is one of the most popular instruments in the world, and is well represented in musical styles as diverse as classical, traditional or folk, and even pop and rock.  Predominantly used in the traditional music of everyday people, the accordion is central not only to the polka-dominated styles of Central and Eastern Europe, French Bal-musette, various Italian folk styles, and traditional English (Morris), Scottish, and Irish music, but also to the  Klezmer sound of Ashkanazi Jews, French-derived Quebecois music, the Cajun music and blues-derived Zydeco of Louisiana and the Gulf coast, the conjunto sound of the Tejaň̃o and Norteno music of south and west Texas and northern Mexico, the Forró music of Brazil, Cumbia and Vallenato from Columbia, the Cueca of Chile, the Argentinean tango, the Merengue of the Dominican Republic, and even the Trot music of South Korea.

In fact, the country that not only produces the most accordions but also has the largest number of accordion players in the world is China.  Yes, China.

So I’ll see your Steve Urkel and raise you a Clifton Chenier.  You be the judge of if he’s cool or not.