Transcendence on a June Night

The topic area for this blog is designated as “Arts, Entertainment, Sports, Leisure, Family”, So naturally I thought about a little lightnin’ bug, whose scientific name is Phausis reticulate, but is commonly known as the blue ghost.

Image from the Encyclopedia Britannica

“As humans we are born of the Earth, nourished by the Earth, healed by the Earth.  The natural world tells us:  I will feed you, I will clothe you, I will shelter you, I will heal you.  Only do not so devour me or use me that you destroy my capacity to mediate the divine and the human.  For I offer you a communion with the divine, I offer you gifts that you can exchange with each other, I offer you flowers whereby you may express your reverence for the divine and your love for each other.
In the vastness of the sea, in the snow-covered mountains, in the rivers flowing through the valleys, in the serenity of the landscape, and in the foreboding of the great storms that sweep over the land, and in all these experiences I offer you inspiration for your music, for your art, your dance.”

~From  the essay, “Evening Thoughts”, included in Thomas Berry’s 2006 book of the same name.

I was first introduced to Thomas Berry (a native and resident of Greensboro) in classes I took with Dr. Charlie Headington in the MALS program here at UNCG.  Sadly, Dr. Berry passed a few years ago, but fortunately, he left us with a considerable body of writings, some of which I’ve included in my BLS class, “Visions of the Creation”.  Thomas Berry’s legacy cannot be summed up easily.  As one of the world’s leading eco-theologians, he drew on numerous cultural, scientific, philosophical, and religious traditions to weave a narrative of a universe filled with mystery, wonder, and the sacred.  But to me, perhaps the most important message Dr. Berry imparted to us is that this knowledge and these insights are accessible to everyone. The earth stands ready to reveal its sacred knowledge, and show us our place and role, and what it means to be human. All we have to do is to pay attention.

Far too often, we only give the earth a passing glance as we go about our daily lives, but we do not really pay attention to it.  But from time to time, the earth will show us something so special that we must stop and pay attention. One such instance occurred to my wife and me last June.  It wasn’t one of Martin Buber’s “I/Thou” moments, but it was magical nonetheless.  Since I’m somewhat lazy, or maybe a should say extremely busy, I’ve pasted a portion of the letter my wife and I wrote to Our State in August of 2011 concerning our ‘stop and check this out’ moment.

“We read with great interest “Southern Lights “about the “blue ghost” fireflies in Henderson and Transylvania counties. About 10 pm on June 5 of this year, we hurriedly left our place outside of Etowah (10 miles NW of DuPont State Forest) to be with our son and his family as they awaited the birth of their second child in Hendersonville. At the foot of our mountain, near the French Broad River, there’s a large open valley.  That night the entire valley was positively aglow in fireflies, from the ground to the tops of the trees. While we wished we could have stayed longer, we could only stop briefly to appreciate this remarkable display as our granddaughter was on her way.

We had no idea why so many fireflies had gathered in that particular place until the arrival of our August edition of “Our State”.  We are now convinced that blue ghosts were responsible for this magical moment that heralded the arrival of a new life.

We have returned same time, same place but have never seen them in such abundance. But with a healthy granddaughter, a memorable sighting and another keepsake edition of Our State, we are blessed threefold! ”

The article “Southern Lights” was written by Diane Summerville.  There are several things that make them remarkable.  First, they are rare.  According to the article, blue ghosts only exist in a few places, and “Henderson and Transylvania counties are two of those places.” They can also be found in areas of Georgia, South Carolina, Tennessee, and Arkansas. One reason for this is that they are very fragile.  We referenced DuPont State Forest (the legislature recently changed its designation to DuPont State Recreational Forest) because due to the cool, moist climate, there are a number of colonies there. But even there, they only come out during late May and June when the temperature and humidity are just right.  Everything was ‘just right’ on that night in June when we saw them. Another reason they are rare is that there are very few females. So when the population of a colony drops, it may take years for them to re-establish themselves. So sighting them is special.  Also, their lights are special.  First, they are slightly bluish, thus the name, blue ghosts.  And rather than staying lit only a second or two like other fireflies, their lights stay lit for several seconds, and sometimes up to a minute. They don’t twinkle. So a few thousand blue ghosts will be far more visible than ordinary fireflies. That was why our valley looked so magical that night.

But understanding what lit up our valley on that June night has taken nothing away from the wonder we experienced. In fact, it has only enriched the memory. I’m sure Thomas Berry would agree.

If you are ever traveling to the Hendersonville area in late May or June, and have some free time, you may want to contact The Friends of DuPont Forest. They normally take two or three blue ghost tours each spring.  But sightings aren’t guaranteed. Conditions must be just right. Wonder cannot be ordered at a take-out window, and it doesn’t come with fries. 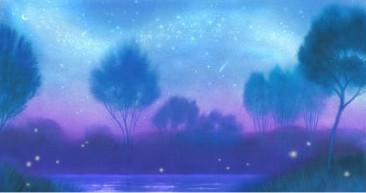 Image from the Blue Ghost Post blog of a blue ghost sighting.

2 responses to “Transcendence on a June Night”