Confederates in the Attic

Posted on November 21, 2011 by mwill2 | Comments Off on Confederates in the Attic

It’s an experience not uncommon to people who love books: every so often, you stumble across one that changes your life.

Years ago, I was catsitting for a neighbor, a Duke administrator with an extensive personal library of contemporary world literature.   It was two weeks before I was to leave for Prague to begin research on one dissertation topic, when I found myself throwing myself headlong into an entirely new topic after being blown away by a book I had randomly selected from his shelves.  I didn’t know then as I poured over Dubravka Ugresic’s The Culture of Lies that I had found not only a new dissertation topic, but also a timely new teaching field that would inspire me for many years to come.  I’m very thankful today that this book and I crossed paths (and especially that my advisor was willing to go along with that abrupt change of plans).  I don’t know that “Czech Women’s Symbolist Literature” would have found the same broad appeal as “Women, War and Terror” as I joined the BLS program a few years later.

So this summer, it happened again.  A recommended title I jotted down from a newspaper article on Southern culture turned up a few weeks later at my county’s Friends of the Library sale and bam- I had a live one.

I devoured the first 300 or so pages of Tony Horwitz’s wildly thought-provoking and entertaining Confederates in the Attic and then dawdled through the last 90 because I could not bear for it to end. 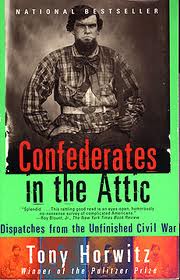 In his quest to understand “how the Lost Cause still resonates in the memory and rituals of the South” (book jacket), journalist Horwitz interviews some often colorful, always impassioned figures, white and black, from urban eccentrics to quiet, small-town folks, struggling to preserve or just make sense of what it means to be Southern roughly 130 years (at the time of writing) after the War Between the States.   He probes the relationship between the Civil War and the South through its symbols (the rebel flag controversy), its branding and marketing (lunch with Scarlett O’Hara, anyone?), and most fascinating, its reenactors, the most hardcore of which spend many damp, cold nights in the fields of Virginia and Pennsylvania, huddled, hungry and stinky, trying to get close to the experience of poorly-equipped soldier-ancestors on the march into battle.

Prior to reading this book, I confess I had an attitude toward the Civil War common to many of us born Yankee: I knew just what I needed to know: the North whupped the South and put an end to a certain deplorable ‘peculiar institution.’  It was, to me, in my shamefully glossed-over understanding, not much more than a tragic means to a well-overdue end.   But, of course, it was that and infinitely more than that.  It was the most horrific 4 years this country has ever seen, with over 620,000 dead and unspeakable suffering on the front lines and on the home front.  In some of the fiercest battles, a soldier died nearly every second.   It was a conflict started in part by tensions between two culturally and economically very different parts of this country, and both its liberating and shattering effects continue to shape this enduring tension 150 years later.

Since I finished Confederates, the pile of Civil-War-related books at my bedside grows almost daily.  With over 70,000 books published on the Civil War as of 2002 (Library of Congress), I’ve got my work cut out for me in pursuing this new personal and academic obsession. 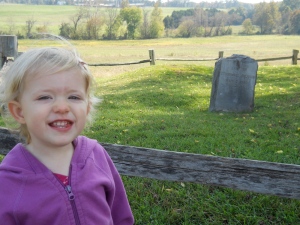 My daughter at the burial site of Stonewall Jackson's arm.

Though my husband and I aren’t yet outfitting ourselves for a march to Gettysburg, we have begun dragging our daughters and any other willing family members to battlefields and other related sites (though not yet on quite as intensive a schedule as the “Civil Wargasm” tours of Horwitz’s star reenactor, Robert Lee Hodge).  A pilgrimage to Lexington and Appomattox is planned for spring.

And of course I’m intrigued about the possibility of bringing this interest into an updated version of Women, War and Terror.  There is a considerable body of exciting research on the role of women in the Civil War.  Mary Chestnut’s famous diary is cited in every source I come across.  I’m about halfway through historian Carol Berkin’s Civil War Wives, which has been a riveting read.  And I’m dying to know more about Jennie Hodgers, aka Albert Cashiers, one of 400 documented cases of women who disguised themselves as men in order to fight as soldiers in the Civil War (http://www.civilwar.org/education/history/biographies/jennie-hodgers.html).

So what book has changed your life?  Or another question I’d love a response to: what is your relationship to the Civil War?  If you’ve got family stories to tell, you’ve got an eager ear right here!