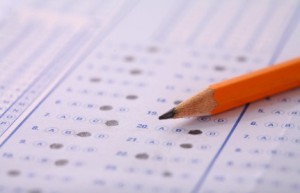 Public school performance in the U.S. is measured, most noticeably, by state-mandated standardized tests.  These tests are used to measure not only student achievement but also the effectiveness of teachers, administrators, and entire school systems.

Unlike the SAT and other standardized tests that are administered and proctored by independent contractors, public school tests are typically administered by the school’s faculty and staff.  The teachers and administrators whose jobs are on the line are actually responsible for collecting the data that could either enhance or jeopardize their careers.  In Atlanta, 178 educators appear to have manipulated or falsified testing data in an apparent effort to preserve their jobs.

In Atlanta, teachers who confessed to cheating told investigators they felt inordinate pressure to meet targets set by the district and faced severe consequences such as a negative evaluation or termination if they didn’t. The behavior was reinforced by a district culture of fear and intimidation directed at whistle-blowers.

Certainly schools should behave ethically but the cheating that is being investigated in Atlanta–and across the country–should come as no surprise since schools could face stiff consequences if standards aren’t met.  And since the schools have access to student answer sheets, manipulating data is quite easy.

There are plenty of debates about the value of these tests in the first place, as they typically don’t measure critical thinking, communication, creativity, and other key skills. But if the data on the tests are so easily corruptible, how useful can these tests be in evaluating anything?  How can school performance be better evaluated and measured?